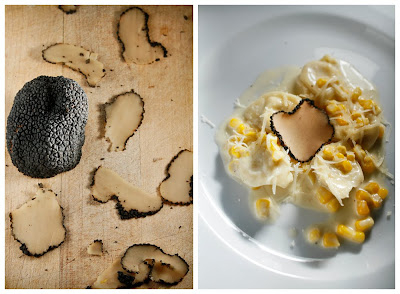 It's impossible to overstate how excited I am about this upcoming four-course vegetarian feast (plus an amuse) put together by two very talented chefs, Andy Ticer and Michael Hudman of Andrew Michael Italian Kitchen in Memphis. The All-Vegetarian No-Menu Monday event is planned for January 31st, 2011.
"We decided to put this dinner together for our vegetarian customers who come here often," Andy said. "It'll be a night just for them."
"No Menu Monday," as they call it, is a unique culinary event that takes place on the last Monday of each month. As you might've guessed, you aren't presented with a menu until the end of the meal. Each course arrives to the table as a surprise. Each "No Menu Monday" has a theme such as "Swine and Wine" or "The Feast of Seven Fishes." 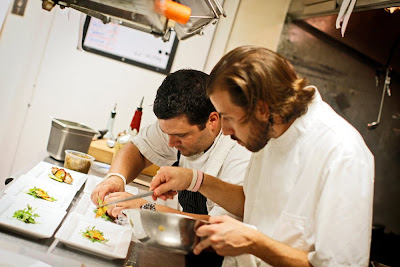 I've been in the kitchen with Andy and Michael during "No Menu Monday" service, and I can tell you that the creative energy is palpable. "It's without a doubt the most fun we have in the kitchen," Michael told me recently. "We're especially excited about working with all vegetables," he continued.
They explained that they have been experimenting with different textures and flavors, and that they see an all-vegetarian menu as an interesting challenge. "We want to create dishes that are so good that people don't miss the protein," Andy told me. "We want to use several preparations of the same vegetable in a single dish," Michael hinted. "I'm intrigued," I told the guys.
At this point they were both being very cagey because they didn't want to ruin any surprises. Suddenly, Andy jumped out of his chair and said, "I'll show you this one thing we're working on." Michael tried to stop him as he ran toward the kitchen. He returned with a lexan container. I can't disclose what was in it, but I have never even heard of anyone doing preparation like that before in my life. All I can say is the food at this dinner is sure to be memorable.
All-Vegetarian No-Menu Monday
Andrew Michael Italian Kitchen
Monday January 31st
Cost: $45
+ wine pairing: $20
For reservations, call 901.347.3569.
(I have already made my reservations. They are limiting seating to 50, so make your own reservation right now.)
Posted by The Chubby Vegetarian at 2:35 PM

The dish at the top is hand-made tortellini stuffed with creamed corn and shaved black truffle. Honestly one of the bet things I've ever had.

woOp for all vegetarian menu!
wish some of our Uk ones would oblige:
fed up with goats cheese, spinach & ricotta or mushroom risotto cop-outs:
need to start a campaign!
☯

What a magnificent idea, All Vegetarian no-Menu Monday. Once, when we lived in Shanghai, China we went to a vegetarian restaurant that made dishes that looked like meat or seafood, but were all made out of vegetables. So creative and delicious.

Sounds Yummy! I'm Vegan and wishing I could join in your feast.

This is a vegetarian dinner and not a Vegan dinner. However, It's "vegan night" every monday at The Trolley Stop Café on Madison. I just had the vegan pizza there and I can tell you that it ROCKED!

Sounds fun- I wish there were something like this in Portland!

Wow- you're SO lucky to have something like this nearby! I'm still amazed at how many restaurants just have a house salad for vegetarians... and EVERYTHING else is meat! There is SO much more out there!