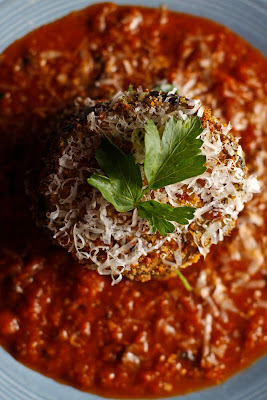 Being lazy in the kitchen is not always a good thing, but it can lead to some unexpected discoveries. While taking a shortcut preparing a batch of eggplant parm, I left out a step. I typically dry out-bread in the oven before pulverizing it into crumbs which I use to coat the slices of eggplant. This time I tore up a 1/2 of a fresh baguette and stuck it into the food processor with two cloves of garlic, a pinch of salt, and a pinch of pepper. The result was a moist breadcrumb unlike any I had ever used. I shrugged and went ahead as usual dredging the eggplant slices in flour, then beaten egg, and then coating each with moist breadcrumbs and arranging them on a large baking sheet. I preheated the oven to 375, drizzled each slice with a little bit of olive oil, and stuck them into the oven. After 15 minutes, once the top started to look golden, I flipped them, drizzled them again with olive oil, and left them to cook for another 15 minutes. The final step is to add a heap of grated parmesan on top of each eggplant during the last five minutes of cooking. This is a great dinner with tomato sauce, parsley, and spinach but it also makes a great sandwich for lunch on-the-go.

The result was fantastic. The outside was crispy and crunchy, but the inside was soft and moist and in between is a rich layer that tastes like it has been batter-coated. With dry breadcrumbs the outside may be crisp but the inside not yet cooked. This way it is all done at the same time. When you take a new path, even if it is a shortcut, you always make a discovery. 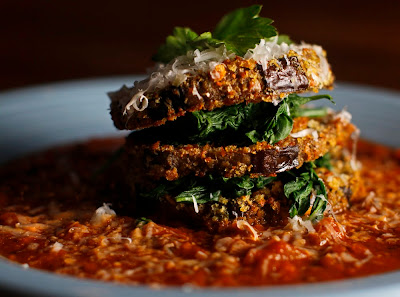 Posted by The Chubby Vegetarian at 2:01 PM